On the 4th of July 1962, a British tanker laid anchor in Das Islands harbour and lifted 254,554 barrels of crude which came from ADMA-OPCOs Umm Shaif field in offshore Abu Dhabi. After loading, the tanker, British Signal, cast off and headed with its modest cargo of oil destined for Japan.

The first shipment and the subsequent changes it has initiated for the country and its people have their roots in the relatively distant history of the search for oil in the offshore areas of Abu Dhabi.

In the early 1950s, following indications of the presence of oil in this part of what was then known as the Trucial Coast, a negotiating team journeyed to Abu Dhabi from England to hold talks with the Ruler of Abu Dhabi for a concession to search for oil.

Early in 1972, BP sold 45 per cent of its shares in ADMA-OPCO which was then known as ADMA Ltd ( Abu Dhabi Marine Areas Limited) to a Japanese consortium, which later came to be known as Japan Oil Development Corporation (JODCO). As a result, JODCO became another active partner in the ADMA venture.

Under a 1974 agreement known as the General Agreement on Participation, Abu Dhabi National Oil Company (ADNOC), which was created to oversee oil and gas operations in the Emirate on behalf of the Government, acquired 60 per cent interest in the Concession and thus became the majority shareholder.

In 1977, a new company, Abu Dhabi Marine Operating Company (ADMA-OPCO), was established as a national corporate body in Abu Dhabi to succeed ADMA Ltd., as an operator for the Concession. 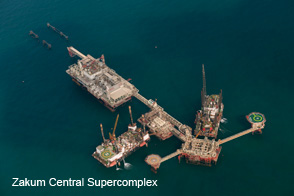 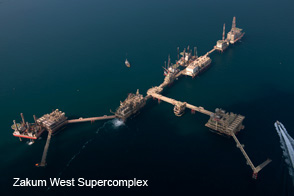 ADMA-OPCO operates two major fields – Umm Shaif and Zakum. The operations are centered on producing oil and gas from these fields, and transferring the crude through a sophisticated pipeline network to Das Island for processing, storing and exporting. The collection and treatment processes of oil and gas are executed by utilizing giant structures, installed in the field in the 1960s and 1970s, and are called Supercomplexes. Manned by skilled UAE and expatriate employees, these complexes comprise modern plants and platforms and are firmly placed in the sea like man-made islands.

Drilling in the offshore areas at present is handled by a fleet of drilling rigs leased from National Drilling Company (NDC). The techniques used in drilling has progressed throughout the years, starting with vertical drilling, then deviated and currently horizontal. New concepts like Drilling the Limit (DTL) were introduced to reduce time and cost of drilling operations, while maintaining safe and high standards.

Logistical support to the offshore operations is provided by the Supply Base in Mussaffah. The support includes tools, materials and items needed there. A fleet of helicopters and boats is utilised to ferry people to and from the offshore sites, and to load or unload materials.

Export quota of oil and gas is controlled and determined by Abu Dhabis Supreme Petroleum Council, and is implemented through by Abu Dhabi National Oil Company (ADNOC).

In relation to ADMA-OPCO’s shareholding, ADNOC, which represents the Emirate of Abu Dhabi, holds 60%, while the rest 40% is divided between BP, Total and JODCO. 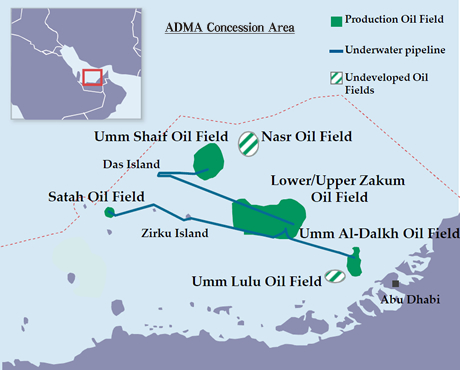